The Shih Tzu and Pekingese dog breeds are small companion pets with an adorable appearance, cuddly temperament, and luxurious coats.

As a result, both breeds are among the most popular dog breeds in the world. These dogs are also commonly confused with one another because they share many similarities.

Both Shih Tzus and Pekingese have similar body types and coloration and even come from similar ancestral backgrounds!

Yet, when comparing them side by side, you will soon see that these two dogs also have many differences.

Let's take a look at what sets them apart:

How To Tell the Difference Between Shih Tzu and Pekingese

The Pekingese is stockier with a wider chest almost barrel like and has more muscle than the Shih Tzu.

The legs of a Shih Tzu are straight, and a little bit longer than they are tall, while the Pekinese legs are shorter and more bowed.

Pekingese are known for the way they walk. They have a rolling gait that is a slow rocking motion that is unique to their breed.

At first glance, the Shih Tzu and the Pekingese may look a lot alike. However, when you look at them more closely, the differences are very clear.

While both dogs are among the brachycephalic breed with flat faces, the Pekingese has a much flatter face than the Shih Tzu.

The Pekingese can be easily distinguished from a Shih Tzu by the extra fold of skin that protrudes below the eyes and above the nose area.

In contrast, the Shih Tzu will have smoother skin in this area.

A further distinction between the Pekingese and the Shih Tzu is that the Pekingese will usually have a black muzzle, around their mouth and nose. 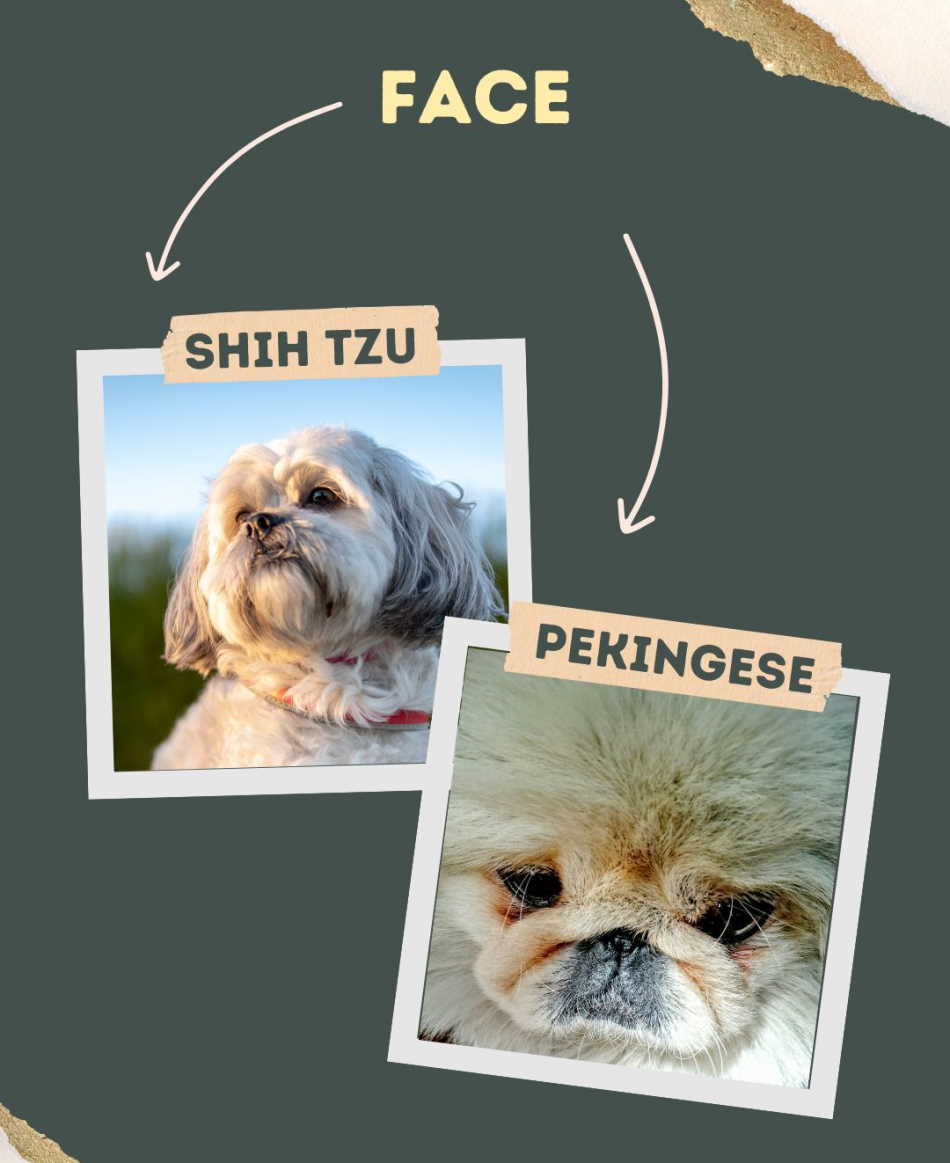 The Shih Tzu and Pekingese both have large round eyes, although the Pekingese eyes will likely protrude slightly more than a Shih Tzu's eyes and are set wider apart.

Because of the prominence of the eyes, both dogs are at risk for serious eye injuries.

Despite the fact that both dogs are classified as toy breeds, they are not the same size.

A Pekingese typically stand between 6 and 9 inches tall and weighs up to 14 pounds.

The Shih Tzu is well known for its long silky double coats and you'll often see them with their hair tied up at the top of their head.

The Pekingese also have a thick coat, if not thicker, but it is coarser and is fluffier around the neck and shoulder area, giving them the appearance of a lion's mane.

In addition, Pekingese will often shed more than their counterparts, who surprisingly do not shed as badly as their long locks might indicate.

The Pekingese and Shih Tzu both come in a variety of coat colors, but with several distinct colors that distinguish the breeds.

Among the Pekingese colors, cream, fawn, and sable are not generally regarded as Shih Tzu colors according to the American Kennel Club.

Sable can be any mixture of tan, black, brown or red, but will typically have black tips to it. Probably the most well-known example of a sable-colored dog is the German Shepherd.

Fawn is a shade of brown that is considered to be on the lighter end of the brown color spectrum and may have a hint of yellow to it.

Cream dogs are a pale color that is not quite white but more so a beige tone.

One of the most famous examples of a cream-colored dog is the Labrador Retriever.

For the Shih Tzu, the liver color is part of their breed standard and not the Pekingese.

The "color" liver is caused by a gene mutation that has more to do with a dog's skin than the color of their coat.

Liver dogs are distinguished by their paw pads, eye rims, and noses.

While other dogs may have black noses, eye rims, and paw pads, on liver dogs these will be brown.

Similarities Between Pekingese and Shih Tzu

Now that you know how to distinguish a Pekingese from a Shih Tzu let's talk about their similarities.

The similarities between the two can be found in their history, temperaments, and coats.

The Pekingese and Shih Tzu both have ties to Chinese royalty.

The Shih Tzu originated in Tibet before being brought over to China as gifts for the royal family before being introduced to western countries in the 1900s.

The Pekingese origins go back to ancient China before becoming known to western countries in the late 1800s.

The Pekingese was also considered a palace dog and considered to be sacred to the royal court.

Both the Pekingese and the Shih Tzu are considered to be brachycephalic breeds.

This means that their faces and noses are proportionately shorter than average, giving them the appearance of having a "smooshed" or flat face.

Brachycephalic breeds are prone to a variety of health issues, the most common of which are respiratory problems.

This is due to the fact that their nostrils are relatively small, which limits the amount of air that can enter their airways, which is why you'll often hear them snoring.

The Pekingese and the Shih Tzu are similar in that they are both friendly and outgoing canines, although the Pekingese may be a little more protective of their space and family.

These two dog breeds are the epitome of a lap dog as they would love nothing more than to spend all day curled up at their human's side.

In terms of their outward appearance, both the Pekingese and Shih Tzu are considered high-maintenance dogs.

It goes without saying that both of these adorable pups are best known for their glorious long and full coats.

Keeping their luxurious locks beautiful and healthy may require daily brushing as well as regular trips to the groomers.

Pekingese vs. Shih Tzu Temperament and Behavior and Trainability

The Pekingese and the Shih Tzu are both energetic dogs.

While they are regarded as lap dogs and can thrive in smaller spaces than bigger dogs, they still need to get proper playtime!

The Pekingese is considered to be an independent dog that can get along with kids but does not like to be handled roughly.

On the other hand, the Shih Tzu is typically very good with children and other dogs and are likely to have more patience with a little rough play.

You may be surprised to learn that these two small dogs are both good watchdogs who could alert you to anything out of the ordinary going on in or around your home, but they are not yappy dogs, and the Pekingese may bark even less than the Shih Tzu.

When it comes to training, the Shih Tzu is likely to be easier to train than the Pekingese.

The Pekingese are independent but can also be stubborn when house training. They also don't like it when others are rough with them.

However, both can benefit from patient and sensitive dog training.

Pekingese vs. Shih Tzu, Which is Right for You?

So, which breed is the best pick for you? This might be a difficult choice as both breeds are great companion dogs!

No matter which one you choose; they both require a lot of upkeep and will need to be groomed often.

However, the Pekingese and the Shih Tzu both tend to form a deep connection with their chosen family and are extremely loveable.

If you come from a family with small children who like to play with animals, the Shih Tzu may be able to tolerate them a little better than the Pekingese can.

On the other hand, if you are looking for your pet to be a little more independent but still loveable, the Pekingese might be the better choice.

Finally, if personality isn't a problem, but shedding is, the Shih Tzu has minimal shedding in comparison.

Overall, the Shih Tzu and Pekingese are both great dogs to have, and whichever one you choose will be the best thing for your new family.