Shih Tzu Colors & Markings: Most Common, Most Rare and Changes Over Time

Isn't it amazing how many different markings and colors Shih Tzu comes in? Some appear more often than others, while others are quite unusual.

There are several colors associated with Shih Tzus, including black, brown, white, tan, red, blue, yellow, silver, and gray. Most Shih Tzu dogs coats have multiple colors and markings, although less often, they may come in rare solid colors. 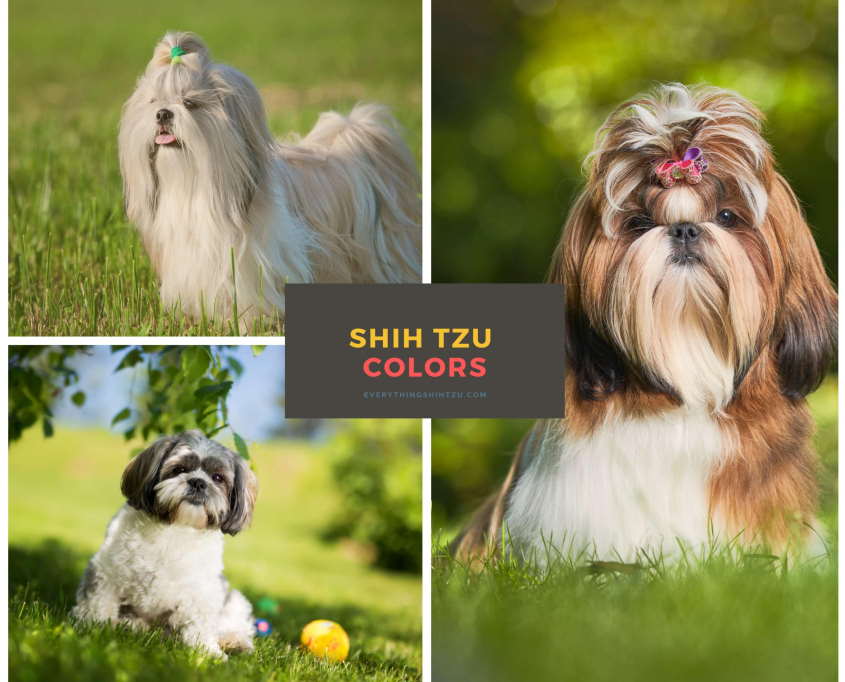 The diverse markings and colors of the Shih Tzu are just one reason why they're so popular among households.

Many factors contribute to the various color combinations seen in this breed, including genetics, environment, and coat type.

Read on to discover more about these interesting colorings and markings available with this breed.

What Are Shih Tzu Colors?

However, there are a few caveats regarding Shih Tzu colors that we'll talk about when it comes to specific coats, such as blue, liver, Isabella, or lavender and brindle.

It's important to note that according to the American Kennel Club (AKC) in its official standard of the Shih Tzu, all colors and markings are "permissible.'

This means that even if the shades are not listed within the AKC, it does not mean that they aren't a valid color or marking.

Although you're less likely to see solid-colored Shih Tzu's, they do exist. They come in a variety of colors, such as:

You'll often find Shih Tzu's to be multi-colored in appearance. Some standard double colors for Shih Tzu's are:

If you thought the Shih Tzu couldn't get any more remarkable, they could also have a tri-color coat.

Interesting enough, this is probably the most common kind of Shih Tzu.

Here are the color combinations as recognized by the AKC.

The most common combination would be the black, gold, and white color combination.

One of the cool things about Shih Tzu coats is the appearance of "untraditional" coloring that may not be as common in other breeds.

This is seen in the pups that have a liver or blue coat.

"Liver" is often referred to by many as a brown tone, which can be a very light brown coat to a deep chocolate brown coat.

Shih Tzu's that have a blue coat aren't necessarily blue but have a blue hue to them when shown in the sunlight.

Blue and liver coats aren't technically related to the color of their fur but more so refer to their skin tones, such as their paws, lips, and noses.

This can be confusing to some, especially when you realize that the "blue" tone is really just a diluted black that comes off as a blue-grey color.

This distinctive coat is caused by a dilute gene variation. 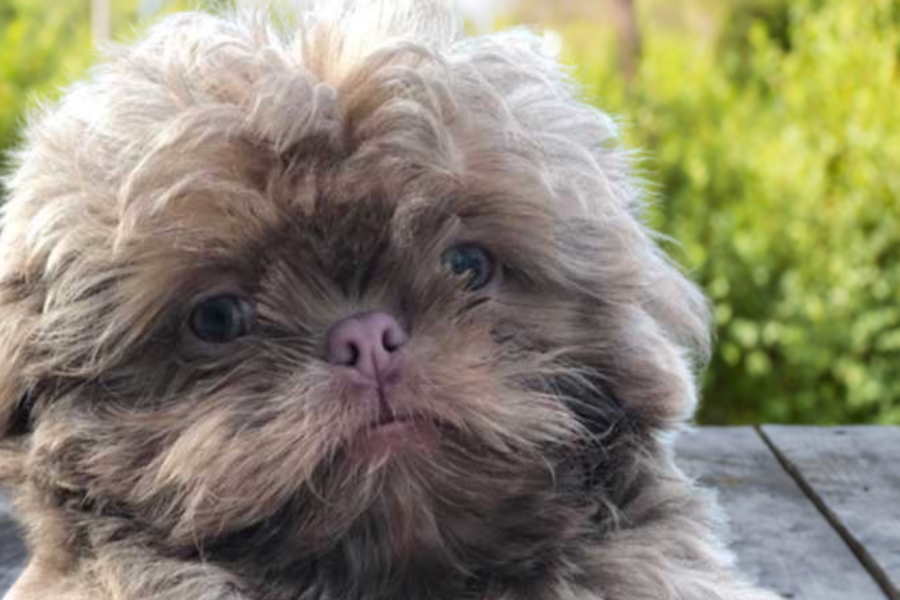 Although the AKC doesn't recognize it, this color of Shih Tzu is defined by a pale brown color.

Much like how blue coats are to black, Isabella, or often called lavender, coats are a version of a liver coat that results from a diluted gene and can even cause your dog to have hazel eyes!

If you're unfamiliar with brindle as a color, it's because it's actually considered a pattern that can consist of many colors.

The AKC, however, recognizes it as its own color for the breed.

Brindle patterns in Shih Tzu's are common, and chances are you've seen them without realizing it's a category all on its own.

This pattern often results in multiple-colored strips across the base coat of the dog. Its uniqueness means that all brindled Shih Tzu's can look different.

Does Shih Tzu Change Color as They Get Older?

The Shih Tzu's coat can change colors from the time they're born until they are a senior. Just like humans get grey hair, so can dogs.

But getting grey hair is not all that can happen when these dogs age.

It's pretty common among the breed to change color within the first year of life, and most times, this is when you'll see the most significant change in their coats.

However, Shih Tzu can gradually change their coat coloring over the years, or it can also begin to change once they hit their senior years.

The cool thing about these color changes is that they can be subtle or even drastic changes to their hair, like them becoming a whole new color.

A good example of their coat changing is when Shih Tzu puppies that are born with a liver color (with a dark brown coat) can lighten to an Isabella or lavender tone.

In reverse, puppies that are born with a lighter coat such as silver or white can develop a darker tone such as black.

So not only can the Shih Tzu puppy's hair color change, but often you'll see their noses or eyes change colors too.

If you thought that was interesting, know that Shih Tzu can also develop color patches instead of their whole hair changing.

If you have a solid white dog, it wouldn't be unheard of if it starts growing brown, black, or even gold patches over time.

Often times if the parent has a coat that has changed color, their offspring will too.

The color-changing coat phenomenon tends to run in the familial line so if you do come across one that is a solid color, expect that it may change colors as it grows.

The Rarest Color of Shih Tzu 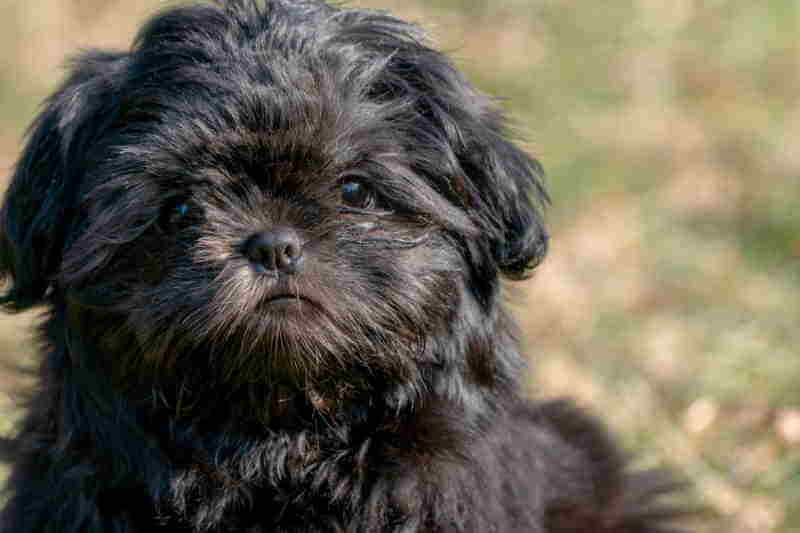 By this point, you may have come to the conclusion that the least common Shih Tzu to come across is a solid color one, but what exact color is the rarest?

An entirely black-colored Shih Tzu is the rarest kind of this particular breed.

Because Shih Tzu are known to come in so many different colors, many Shih Tzu that may have a solid appearance will most often have at least a streak or two of a different color somewhere on their coat.

Along with its many color variations, the Shih Tzu has many different patterns and markings.

Before we get into the most common ones, let's first go over the distinct characteristics of these types of markings and patterns.

Blaze:  This marking is defined by a streak of color between their eyes that stops toward the top of their heads.

Saddle: It's called a saddle pattern because it is a marking that covers their lower backside, kind of how a saddle is on a horse.

Shawl/Collar: This marking is seen on mostly solid-colored Shih Tzu, who has a different colored marking (usually white in color) around their neck.

Flare: This pattern is similar to the blaze pattern but differs in that the streak goes farther down on the head and down the back.

Parti: This Shih Tzu will have a white base coat with different colored patterns such as brindled or gold.

Tuxedo: Mimicking the appearance of a tuxedo, a tuxedo pattern is a solid color marking covering the chest and chin and may cover the feet.

Mask: Darker shades of color that cover the muzzle or the entire head. This marking can also extend to the ears or even the tail and back.

Abstract: Refers to splashes of white over the coat. It can appear on the tail, toes, or chest.

Eye Stripes: A darker shading in the corner of the eyes and looks like an eyebrow.

Dobie, or often called tan points: Occurring with darker Shih Tzu. It's when they have tan markings around their muzzle, eyes, or paws resembling the colors of a Doberman. These markings are considered among the rarer for the Shih Tzu.

Ticking: Mostly seen in maturing Shih Tzus, this is the appearance of spots in the white fur found more on the skin of the belly.

While there are an array of markings and patterns, the most common ones seen on the Shih Tzu are the tuxedo, saddle, flare, collar/shawl, and blaze patterned coats.

If you weren't already aware of the complexity of the colors and markings of the Shih Tzu, it might be safe to say that now you do.

The sky is the limit when it comes to the color pairings of this adorable breed.

Whether it's the rare entirely black coats or the more common multi-colored coat, from solids to tri-color, it could have tuxedo markings or even have a dark mask along its coat.

The unique color-changing that can occur within the Shih Tzu breed is surprisingly common and pretty neat.

So if you're in the market for this adorable pup, you don't have to worry about not getting a specific color.

You may get exactly what you asked for in a few months or years.

Who knows, the possibilities are endless when it comes to this magnificent breed.