The history of the Shih Tzu dog breed is an interesting one however somewhat controversial.

This small dog breed is generally accepted to have originated in China, with an ancestry of Tibetan dog breeds. 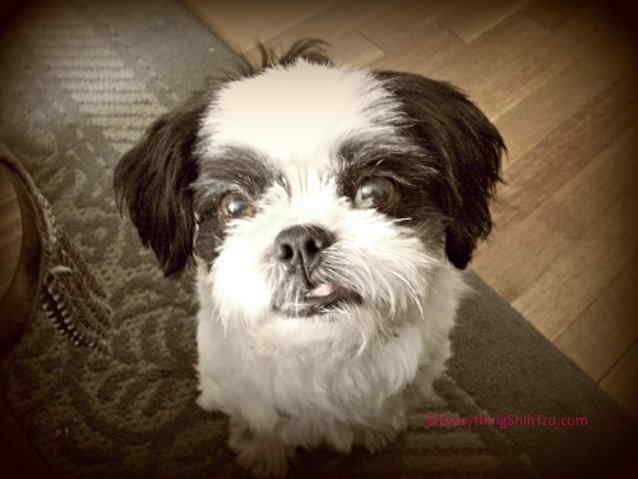 The ancestors of the modern Shih Tzu are thought to have originated from Tibet as early as 600 AD and are believed to be one of the oldest dog breeds in the world today.

Although mostly thought to have originated in China, some breed journals indicate that two breeding Shih Tzu dogs were given as gifts to the Chinese imperial courts from the Tibetan Dalai Lamas as recent as the late 1800's.

It has often been presumed that Shih Tzu were bred by crossing the Lhasa Apso and Pekinese dog breeds, but there are others who adamantly disagree.

However, once you have looked upon a Lhasa Apso and Pekinese, you will undoubtedly see the resemblance between the two breeds and how difficult it is to discern the difference without closer examination.

While the truth of their origin is still uncertain, what is generally accepted is that the Tibetan holy dogs are the ancestors of today’s Shih Tzu.

The Historic Legend of Shih Tzu and the Buddha

We all love a fascinating story and the Shih Tzu is certainly one of those good, hard to believe magical ones that leave us wondering if it could possibly be true.

Shih Tzu, when loosely translated in Mandarin means "lion" and lions as it were, hold a significant importance in the Buddhist religion.

To them, the lion symbolize royalty, strength and bravery--fear nothing, and act without delay.

The Buddha's symbolism of lions, does in fact remind me of my own Shih Tzu dogs -- nobel, strong and brave. 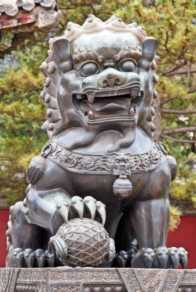 A pair of huge stone lions, or lion dogs like the one you see here, guard palace doors, many tombs, temples and public buildings.

They are thought to protect the building from harmful spiritual influences and harmful people that might be a threat.

It had been widely believed that Buddha himself tamed and rode a lion on his ascension to earth.

I'm inclined to think this belief was symbolic of his spiritual journey to enlightenment, and not a reality.

But this is where the story of the Shih Tzu gets interesting.

Legend has it that Buddha had traveled with a little lion dog as his constant companion.

This little dog would transform itself into a full sized lion and carry the Buddha upon its back over long distances.

The Shih Tzu has been said to be this "lion dog"

While the Shih Tzu have been known as little "lion dogs" for quite some time, the truth is there are several dog breeds which were bred to resemble small lions.

Regardless, although some legends are based on actual events, I'm going to have to seriously question whether this one has any veracity.

Although the history of Shih Tzu is not entirely clear, what is known is that they were highly valued by the Empress Dowager Cixi, the most important woman in Chinese history.

During her reign in the 19th century, the Empress Dowager instructed the court eunuchs to maintain their breeding until her death in the early 1900’s.

Prior to her death, the breed had been virtually unknown by the outside world.

After the Dowagers death, a few Shih Tzu were brought to Europe during the pre-war years, to England (by Lady Brownrigg, wife of Douglas Brownrigg the Quarter Master General to the North China Command), to Norway (by Madame Henrik Kauffman, wife of the Danish Ambassador to China), and to Ireland, (by a Mrs. Hutchins.)

This turned out to be very important to the survival of the Shih Tzu breed, whereas when the communists came to power in 1949, these noble dogs were viewed as a symbol of wealth and privilege, as well as, a drain on resources and were eventually all destroyed. 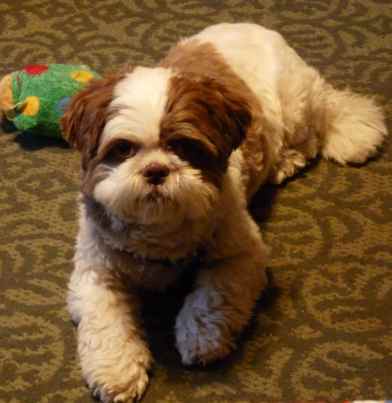 History of Shih Tzu - Max laying on his royal rug

The Shih Tzu history would have ended there, were it not for the breeding done by those three women who brought them to the western world.

It’s said that all of the Shih Tzu today are descended from those few dogs.

It’s a sad thought to think we may have not been graced with these precious little lion dogs, had it not been for these saved few.