In the wonderful world of dogs, there are quite a few breeds that are easily confused with each other.

While Shih Tzu and Lhasa Apso have many similar features (thanks to their shared bloodline), they are two distinct breeds. 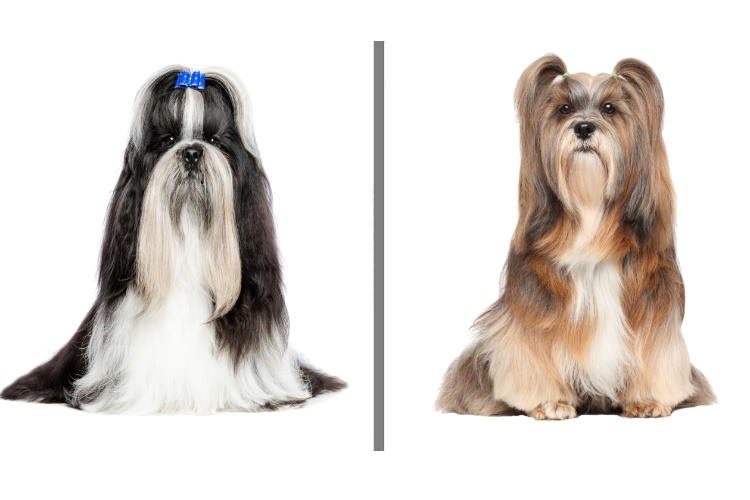 One of the most significant differences between a Shih Tzu and a Lhasa Apso is their size. A Lhasa Apso is generally larger than a Shih Tzu. However, it often appears slimmer due to a smaller bone structure.

Despite this size difference, it can still be tricky for the untrained eye to tell these two pups apart.

Below is a look at some of the other differences between the regal Shih Tzu and the adorable Lhasa Apso.

Difference Between Lhasa Apso and a Shih Tzu

At first glance, the Shih Tzu and Lhasa Apso can look very similar. Yet, upon closer inspection, you'll start to notice some variations.

Though very slight, the following differences are some of the best ways to tell these two breeds apart. 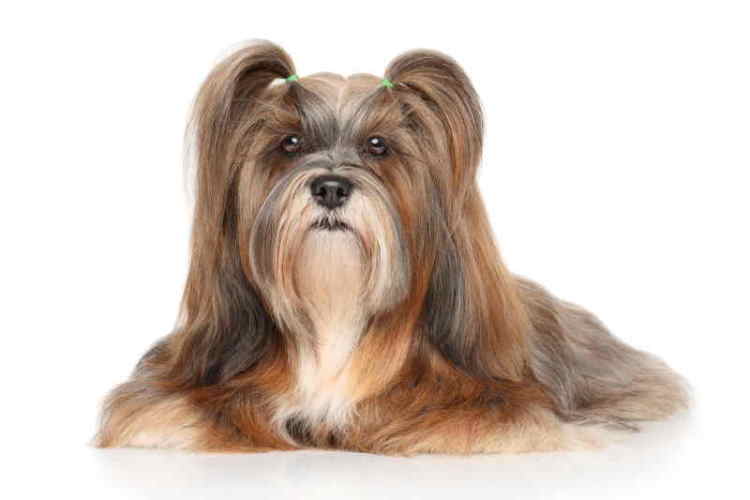 The Lhasa Apso and Shih Tzu both feature long, flowing coats, but if you look closely, that's where the similarities end.

The Lhasa Apso usually has a heavy, flat-hanging coat, generally parted in the middle. In contrast, Shih Tzu has a more flowing, luxurious, double-coat with more waviness.

When it comes to coat color, the Lhasa Apso showcases hair that is usually gold and white, black, black and tan, red, white, or cream. Sometimes featuring black tips, especially on the ears.

Some Shih Tzu can also feature a "mask" on their faces.

The Shih Tzu features a broader skull than the Lhasa Apso and has large, round eyes.

Depending on the chosen haircut, the Shih Tzu's face usually has a flatter, more chrysanthemum shape compared to the Lhasa Apso, which features a longer nose and narrower skull.

The Lhasa Apso tends to have smaller, more almond-shaped eyes and a more exaggerated beard and whiskers that add to its more lion-like look. 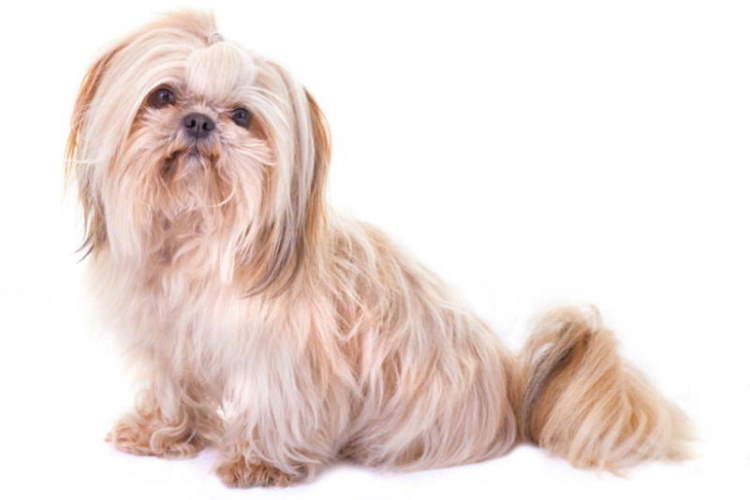 The Lhasa Apso is typically larger than the Shih Tzu, although slimmer in appearance.

The Shih Tzu features a slightly larger bone structure than the Lhasa Apso, giving it a sturdier/stockier appearance, despite its typically smaller size.

The Lhasa Apso has paws that almost resemble cat's feet, being round in shape and featuring a feathery appearance.

A Lhasa Apso's tail curves toward its back, just like a Shih Tzu's; however, it has a more twisted or screw-like appearance.

A Shin Tzu has firm, padded paws and a flowy plumed tail.

Behavior Differences Between the Shih Tzu and Lhasa Apso 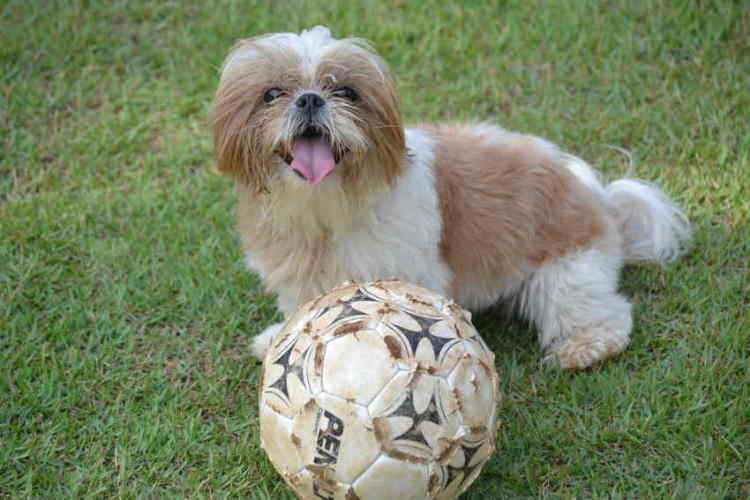 While both of these breeds are playful and affectionate, the most significant difference is that the Lhasa Apso is this way mostly with its family.

When it comes to strangers, Lhasa Apso are more reserved and cautious. A Shih Tzu, on the other hand, has an outgoing and friendly temperament with both family and strangers alike.

This outgoing nature makes the Shih Tzu slightly easier to train than the Lhasa Apso. However, it all depends on your pup's personal stubborn streak.

The Lhasa Apso's primary origin is as a sentinel in Tibetan monasteries. Therefore, the breed holds a lot of this heritage in their personalities, being overly cautious of the unknown, barking at strangers, and even getting a bit aggressive if they feel challenged or threatened.

Conversely, Shih Tzu are affectionate and playful with pretty much anyone. Most often, they just want to be with you, snuggled up on your lap, or have the ultimate play session.

Other Ways Lhasa Apso's and Shih Tzu Are Different

In addition to their physical and behavioral differences, these pups stand apart in a few other ways.

The Lhasa Apso has an average life expectancy of about 12 to 15 years and is classed in the AKC non-sporting group.

The Shih Tzu is a member of the AKC toy group and has an average lifespan of roughly 10 to 18 years.

If you purchase a Lhasa Apso, you can expect to pay about $500, although depending on the bloodline, don't be surprised to see a price tag as high as $5,000!

What Do Shih Tzu and Lhasa Apsos Have in Common? 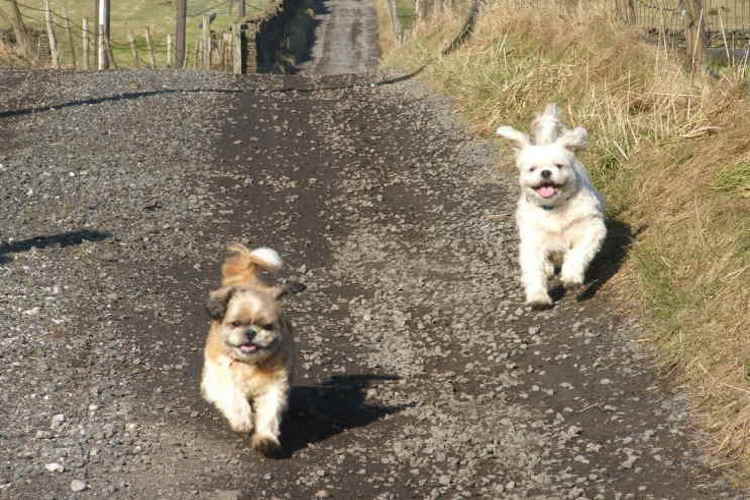 Now that you've seen all of the ways these two dogs differ, here is what features make them the same.

The most significant connecting factor between these two dogs is that they share a bloodline and originate in Asia.

Both breeds have been around for at least 1,000 years.

Shih Tzu are presumed to be a cross between Lhasa Apsos and Pekingese and is believed to first be bred in Tibet before being brought to China as a gift to the emperor.

Both pups were also endowed with nicknames that included the phrase lion dog, thanks to their lion-like appearance.

Both of these pups are fairly trainable yet have a stubborn streak, which means they are eager to please you, as long as they want to do it.

In terms of grooming, these dogs both need frequent brushing, but luckily shed little, and both breeds are relatively healthy and sturdy pups!

The Best of Both Worlds

After checking out all of the similarities and differences between these two breeds, are you having trouble deciding which is the right choice for you?

Well, you might not need to make a choice.

You could always opt for a Shih-Apso; that's right, a mix between a Lhasa Apso and a Shih Tzu.

These feisty pups are just as cute as both of their parents and can also be a wonderful family pet.

While there are several variations between these breeds, there's one big thing that all of these dogs have in common.

These breeds (and mixed-breed) make excellent pets and affectionate companions to their families.

Whether you opt for a Lhasa Apso or a Shih Tzu, or even a Shih-Apso, as the next addition to your household, you can't go wrong!