The Shih Tzu breed is one of the oldest dog breeds in the world. 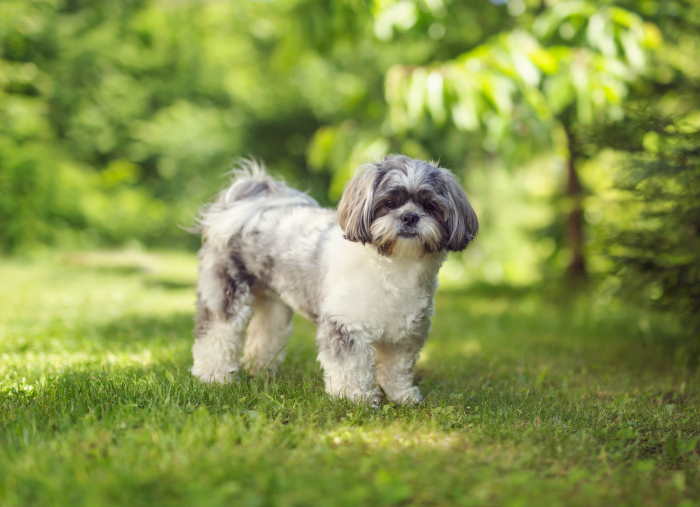 These dogs were originally bred in Tibet, and it is believed that the Tibetans bred them to be small replicas of lions.

Lions were an important figure in Buddhist mythology, symbolizing royalty and leadership.

The tiny “lion dogs” were then sent to China as gifts to the Chinese emperors, and it was in China that the majestic pups were bred with pugs and Pekingese to form the modern-day Shih Tzu.

These Shih Tzu were bred primarily to be lap dogs to Chinese royalty.

At first, it was believed that the small dogs were used to warn of the approach of unwanted visitors, but the little lion dogs soon became a favorite of the Imperial Chinese court and were considered mainly as companion pups.

Shih Tzu were regarded so highly in China, that after the Chinese began trading with the West, they refused to give away or even sell the little pups.

The dogs remained strictly in China for quite some time.

It is believed that we have the Dowager Empress Cixi to thank for the precious Shih Tzu that we know today.

She was extremely careful in regards to the breeding practices for the revered dogs.

Interestingly, all existing Shih Tzu originate from only 14 dogs -- 7 males and 7 females.

How Did Shih Tzu Get to the United States?

During the Communist Revolution, and with the death of the Dowager Empress Cixi, the tiny breed was practically wiped out in China, mainly due to the destruction of the Empress’s breeding facilities.

Although there were some that tried to sustain what she had begun, it was a trying task and many were not as careful with their techniques as the Empress had been.

Therefore, we can thank the rebuilding of the breed to 14 dogs.

It wasn’t until 1930 when the first pair of Shih Tzu was exported to England.

The fourteen dogs that were believed to make up the gene pool of all Shih Tzu were spread out over time as imports from China, and also include a Pekingese dog that was used in a crossbreed in England in 1952.

Only one Shih Tzu that was actually bred inside the Imperial Palace made it to the Western world, and the small dogs were soon scattered throughout other parts of Europe by the time of WWII.

In the late 1940s and 1950s, the returning military brought some of the first Shih Tzu into the United States.

The striking and majestic appearance and wonderful temperament of these little dogs soon made them a favorite in the US and led people to begin breeding programs.

In no time the adorable pups were soon sought after by many of the upper echelons of society.

Despite their popularity, Shih Tzu were not readily recognized as an official dog breed.

The AKC accepted the dog in 1955, but only in the miscellaneous class.

Multiple Shih Tzu groups popped up across the country, created by owners of the precious pups, including the Shih Tzu Club of America in 1957, in an effort to keep the breed in the spotlight.

These groups were persistent in their quest to make Shih Tzu a registered dog breed.

In 1969, Shih Tzu owners were victorious, and the AKC officially recognized the tiny pups as a dog breed in the United States.

The majestic pooches immediately became one of the most popular choices for a canine companion to socialites and stars.

Over the years, the popularity of the dogs grew, and the breed found its way into many homes across the country.

What Shih Tzu Are Bred For Today

Today Shih Tzu are mainly bred as companion animals, and they are also a popular competitor in dog shows with their flowing, silky coats and regal stature.

The Shih Tzu’s loving and friendly disposition also make it an excellent choice for a family pet, and it is one of the top 20 toy dog breeds in the world.

Although the small dogs were sometimes used as an alert system of sorts in Chinese palaces, barking to warn that a possible threat was approaching, Shih Tzu are not bred for this specific purpose.

Your precious furry friend may enjoy barking (especially at times when it isn’t really wanted) to tell you all sorts of things, but first and foremost, she is meant to be a companion.

Sadly, there are some less-than-reputable breeders whose main goal is to make a profit, often at the expense of a dog’s overall health and safety.

As precious as these tiny teacup pups are,  they are not a separate, stand-alone dog breed as some breeders would have you believe.

These dogs are often bred through unethical conditions for the purpose of selling them to people who are looking for more of a cute accessory than a loving, furry companion.

Also known as Imperial Shih Tzu, these dogs are not necessarily always unhealthy or bred through unsavory means, so it is crucial that you thoroughly research any breeder before choosing where you will get your Shih Tzu.

When it comes to dog shows, there are all different types of shows that are spread out across the country, some more popular than others.

Shih Tzu have definitely found their way into the show ring as some true contenders for winning prizes, but how aggressive do owners get when it comes to breeding their dogs for show?

First, it’s important to understand that in the group and breed rings of competition, the dogs are not judged against one another, but against the breed standard.

Then the top dog in each group advances to Best in Show, where one dog is declared the champion.

Knowing this, it is understandable that if you plan to show your dog you would want to carefully consider the breeder you choose to get your dog from.

Certain breeders may be more focused on breeding their dogs for owners that have the intention of showing their animals.

However, this is not the overall reason why Shih Tzu are bred, and it is just considered a unique circumstance for particular owners.

Shih Tzu, ultimately, are bred as companion animals and are most often found in households as the affectionate and playful family pet.