But it's no secret that what's in a hotdog remains somewhat of a mystery. So, it makes perfect sense for you to wonder if it's okay for your dog to eat them. 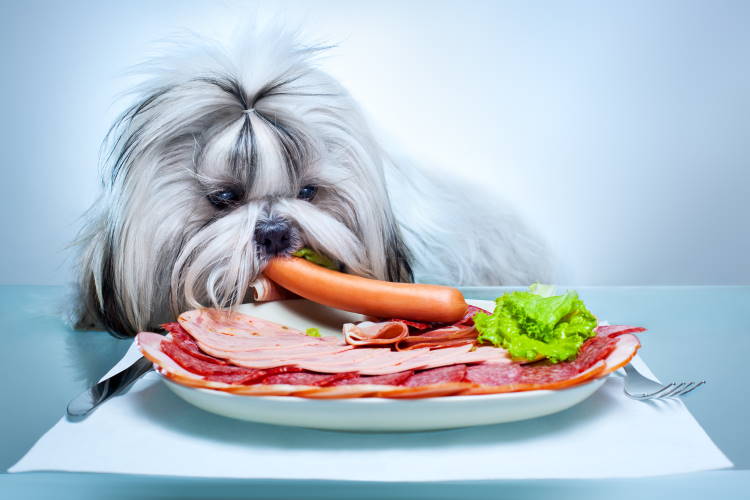 In a nutshell, eating a few bites of hotdogs on occasion isn't likely going to hurt your dog. However, hotdogs are highly processed fatty foods that could lead to an upset stomach and diarrhea and could be harmful to your dog's health if consumed frequently.

Instead of hotdogs, you're better off letting your dog enjoy an alternative treat, like some unseasoned cooked chicken or beef.

Ingredients in Hotdogs That Aren't Great for Your Dog

People tend to joke about hotdogs, calling it "mystery meat," yet according to the National Hotdog & Sausage Council (yep, it's a thing), Americans eat about 20 billion hotdogs a year.

Still, that doesn't make frankfurters, tube steaks, red hots, or whatever else you want to call hotdogs a good food choice for your Shih Tzu.

Okay, so you could argue that some of the ingredients in many hotdogs, like monosodium glutamate (MSG) and sodium nitrate, aren't good for anyone.

In fact, certain studies have linked high consumption of sodium nitrate to increased heart disease risk. (It makes you wonder why people eat so many hotdogs, right?)

Plus, hotdogs typically contain sugar or various sweeteners, which can contribute to issues like obesity, diabetes, and low energy, among other problems.

Finally, sodium, which can lead to dehydration and high blood pressure when consumed in excess, is abundant in hotdogs.

These ingredients might not be a big deal for a person when you eat just one or two hotdogs here and there. However, for a dog, especially a small dog like a Shih Tzu, these ingredients become even more problematic.

For example, just one hotdog would likely double (or even triple) your pup's daily sodium limit.

Then, you need to consider some of the seasonings you find in many hotdogs. Many of them contain things like onions and garlic, which can be toxic to dogs and may cause vomiting, diarrhea, and major GI issues.

Your dog can choke on hotdogs

Even small children risk choking on them, which is why caregivers are supposed to slice the hotdogs or sausages lengthwise and then cut it horizontally, creating small bite-size pieces.

But, dogs that stumble upon a fallen hotdog (or boldly steal one off the table) will try to tackle their prize whole.

Some well-intentioned but uninformed pet parents might even toss a whole hotdog to their furry friend as a special snack.

This is risky, as it significantly increases the choking danger, especially for large dogs that will typically bypass chewing and try to swallow it whole.

What to Do If Your Shih Tzu Eats a Hot Dog

Most likely, if your Shih Tzu only snags one hotdog, you don't have to worry.

Your dog may experience an upset stomach and diarrhea, but it should subside within the day. Of course, you can always call your vet to make them aware of the situation and ask for specific guidance.

It's very important to give your pup lots of water and keep a close eye on him if he has diarrhea. You don't want your dog to become dehydrated.

If diarrhea persists for more than a day, or you notice any other unusual behavior, contact your vet right away or bring your dog to an emergency clinic.

It's especially important if you believe your pup ate multiple hotdogs, or you know it contain ingredients toxic for dogs.

Also, note if your dog got a hold of a hotdog with toppings, etc.

Many popular items people like to put on their hotdogs are also a problem for dogs.

For example, relish contains sugar, salt, and seasonings that can pose some health hazards for your dog. In addition, mustard has lots of sodium, which can jack up the already high sodium content of the hotdog.

Additionally, as previously mentioned, onions are poisonous to dogs, and other things, like peppers, can cause digestive problems.

Finally, ketchup contains a lot of sugar and can mess up your dog's energy levels and contribute to weight problems.

Furthermore, hotdog buns are loaded with sugar and carbohydrates that can wreak havoc on your pup's health.

What About Using Hot Dogs as Training Treats?

Some people use hotdogs as training treats, and although this may seem like a good idea, it only works if you keep several notable points in mind.

First, you need to ensure that you cut the pieces into appropriately-sized small bits that will not present a choking hazard for your dog.

Also, even though most hotdogs come pre-cooked, it's better to cook them again to ensure their safety and no bacteria are present.

Finally, moderation is key. The whole point of a training treat is to give a tiny bit of a special treat when your dog performs the desired behavior well.

Therefore, ideally, if you're using hotdogs as training treats, your dog only gets a few small bits, which would not be a large enough amount to create any issues.

It's also necessary to store the hotdogs properly, such as in the fridge inside a sealed container, to avoid spoilage which could make your Shih Tzu sick.

Keep in mind that hotdogs still have a high sodium content.

So if you're using hotdogs as training treats, it's even more critical to ensure your dog has access to fresh water to avoid potential dehydration.

Overall, since eating hotdogs comes with some downsides for dogs, the best idea is to opt for alternative options as your training treats.

For example, you can use frozen blueberries, small bits of cooked, unseasoned pork, chicken, or beef, or actual training treats made specifically for dogs.

Honestly, with so many food options out there that are healthy and beneficial for dogs, there's really no reason to serve your Shih Tzu hotdogs.

But, if you want to give your furry friend a tiny nibble or two at your next cook-out, it's not likely to do any major damage (except maybe teaching your pup to beg.)