Do Shih Tzu And Cats Get Along? (how you can make it happen)

If you’re thinking about introducing a cat into your household and you have a Shih Tzu, or vice versa, then it’s natural that you would want to know if Shih Tzu and cats get along.

After all, nobody wants their furry family members to be unhappy or snub their noses at each other.

Cats and dogs can co-exist, in many circumstances, but this is not automatically true for all dog breeds.

So, do Shih Tzu and cats get along?

Although Shih Tzu are known as a dog breed that can tolerate cats, it’s important to note that it really depends on the individual animals’ personalities.

In general, not many households have both animals, and of the ones that do, the results vary depending on the animals’ unique temperaments.

The idea that dogs and cats are destined to be lifelong enemies is a stereotype for the movies.

There are homes where cats and dogs get along perfectly well with each other, or at least happily ignore each other.

What’s important is that you know the best ways to introduce your two animals to each other to encourage the friendliest outcome possible.

What Do Dog and Cat Relationships Really Look Like?

Here’s an interesting bit of information.

If you think about every typical dog and cat scenario that you’ve seen in a TV show, movie or book, the gimmick is always the barking dog chasing the poor defenseless kitty up a tree.

Ironically, according to a Psychology Today survey, “Cats were more likely to threaten dogs, while observations of dogs threatening cats were rare.”

This is a little like, "Don't judge a book by its cover."

In other words, just because you have a dog it doesn’t automatically mean you can’t get a cat.

And if you already have a cat, it doesn’t mean you can never own a dog.

Every circumstance is different.

The best thing to do is to arm yourself with the knowledge of how dogs and cats interact so that you can make the best decision for your particular situation.

Normally, in a relationship between a dog and a cat, the cat will be the deciding factor on whether or not the relationship will be successful.

In other words, if the cat seems comfortable, then the animals will probably get along fine.

There have not been numerous studies on how cats and dogs get along, so what is known is definitely somewhat limited, but a common finding does seem to be that if someone is going to pick a fight, it will be the cat.

Another thing that does seem to make a difference is how young the animals are when they are first introduced.

For example, a kitten and a puppy will most likely have a higher chance of getting along as they grow up together than an adult cat will have with a brand new puppy coming into the household.

Likewise, an adult dog (especially a large dog) might not do well with a small kitten, especially if the dog mistakes it for a new chew toy.

It’s always a good idea to introduce the potential roommates to each other before making the leap into cohabitation. 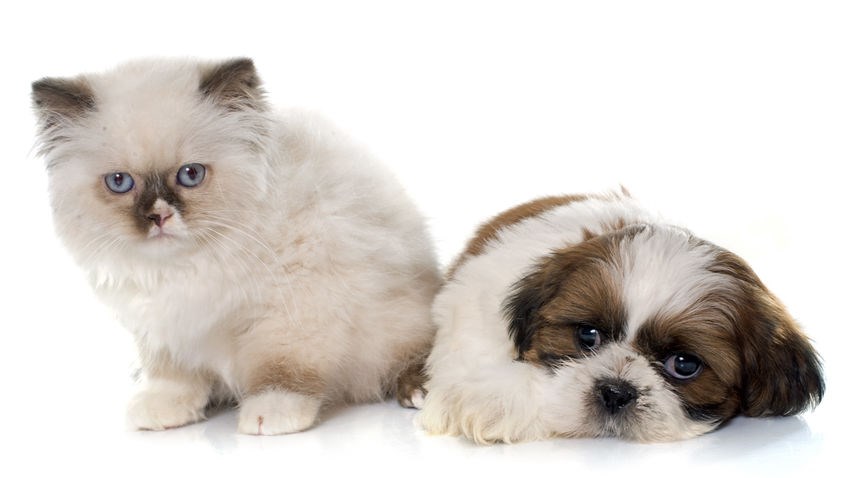 What Should You Do to Introduce a Shih Tzu to a Cat?

So, then what about Shih Tzu and cats?

If Shih Tzu are known to be a breed that generally will accept cats, or at least tolerate them, this doesn’t mean it’s an automatic green light to have the two animals together.

There are still some things you will want to consider and do before becoming one big happy family, such as the following:

Ideally, these visits will be with the actual animals that will be living together.

If this is not possible, then see if you have a friend or family member that would be willing to bring over his or her pet.

This might not give you an exact idea of how your pet will react to the new addition, but it can at least give you an inkling.

During all of the introductory visits, make sure your Shih Tzu is on a leash (with a harness, not a collar) and that the cat has an escape route.

If a cat feels like he is trapped, he will likely panic, causing him to act out, bite and/or scratch.

Be sure to stay close and supervise, but stay calm.

Animals can pick up on the feelings of the humans around them, so if you are tense or nervous about the meeting, your animals will be, too.

How Can You Tell if a Shih Tzu and Cat Will Get Along? 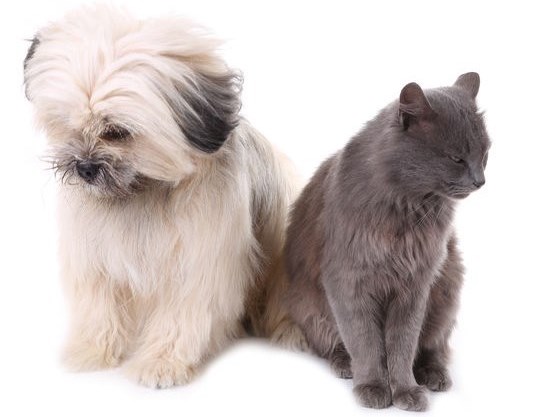 While there’s no crystal ball that can tell you for sure if your furry friends will coexist happily, there are a few clues that you can keep an eye out for.

Certain actions will indicate things are going to work out just fine, while others will be a big red flag.

Obviously, if the two animals are tolerating each other well and behaving, then that’s a good sign.

They don’t have to be acting like best buddies, bonds need to form over time if they’re going to form at all.

But, even ignoring each other is a good sign.  Hey, it means they are tolerating each other, so work with what you get.

On the flipside, there are signs that the match is probably a no-go:

For the match to work out, both animals need to show signs of tolerance. It won’t do any good if the relationship is lopsided.

If they seem to be fine with each other then set-up a few more meetings before the official move-in.

Make sure to monitor their behavior closely in the first few weeks and give them time to adjust to each other.

Someday they may actually become friends like this Shih Tzu that saved a cat from racoons.

What Can You Do to Make Sure Your Animal Companions Stay Friends? 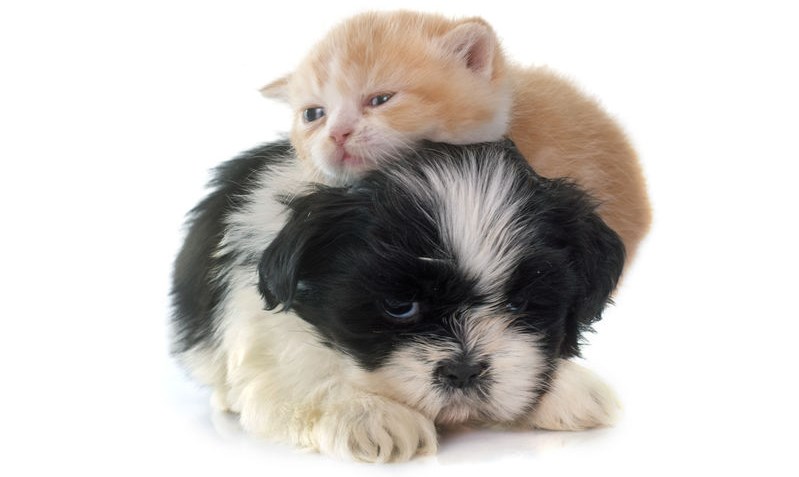 Once you and your animals are all under one roof, you will want to make sure that your pets continue to enjoy a stress-free life.

Basically, if you are thinking about having a cat and Shih Tzu live under one roof, you will want to take your time to do it properly.

Rushing into the situation will only end in frustration and flying fur.

Therefore, take your time to assess how the two animals interact and only proceed if they show true potential for getting along.

Under the right circumstances, both animals are capable of showing friendliness to each other, but many times even ignoring each other can make them acceptable roommates. 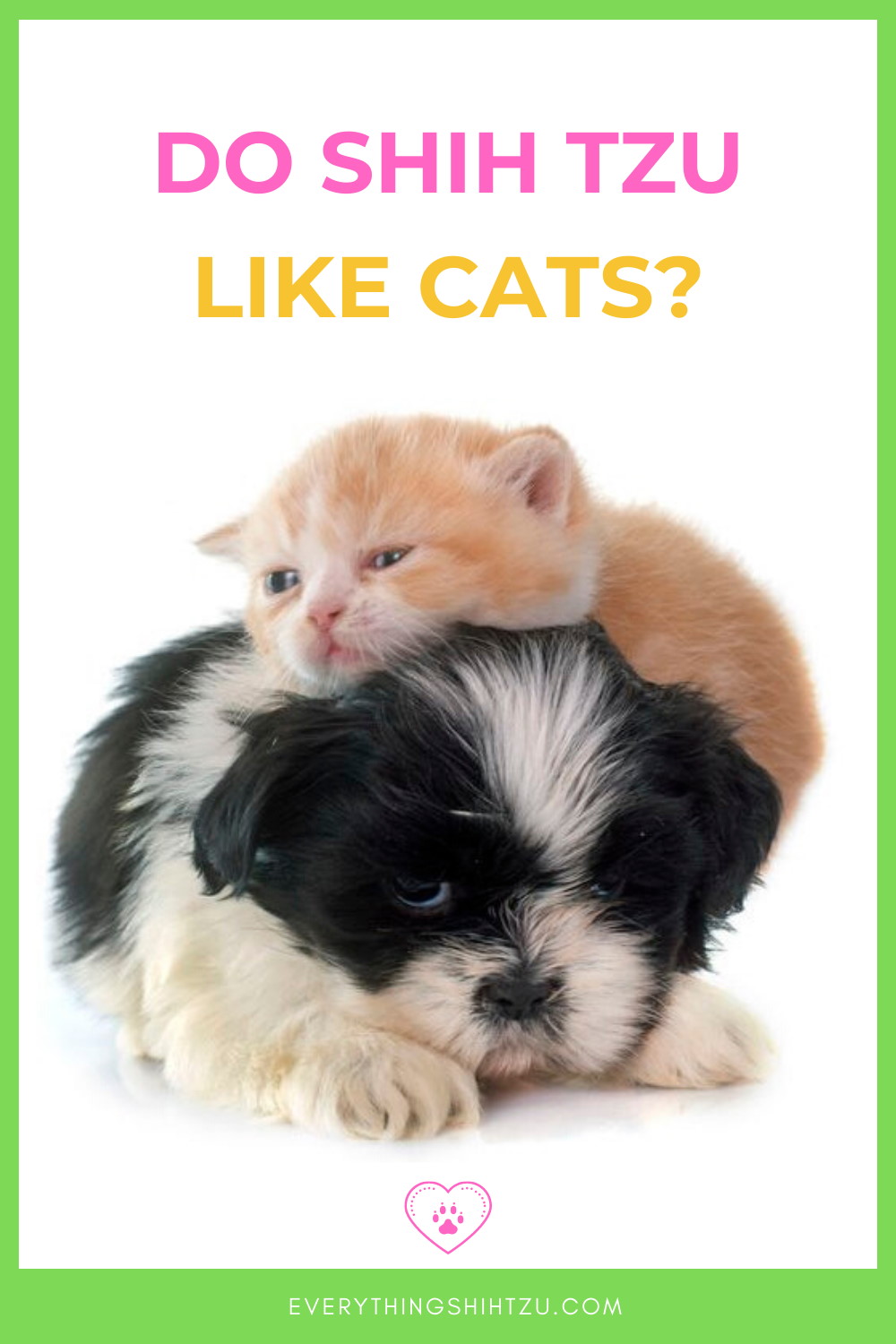