Can Shih Tzu Have Blue Eyes?

I recently met someone whose dog had the most beautiful blue eyes and thought about the many Shih Tzu I have met over the years, all with beautiful soulful eyes, but none of them blue.

This got me wondering if a Shih Tzu can have blue eyes so I did a little research and here’s what I found. 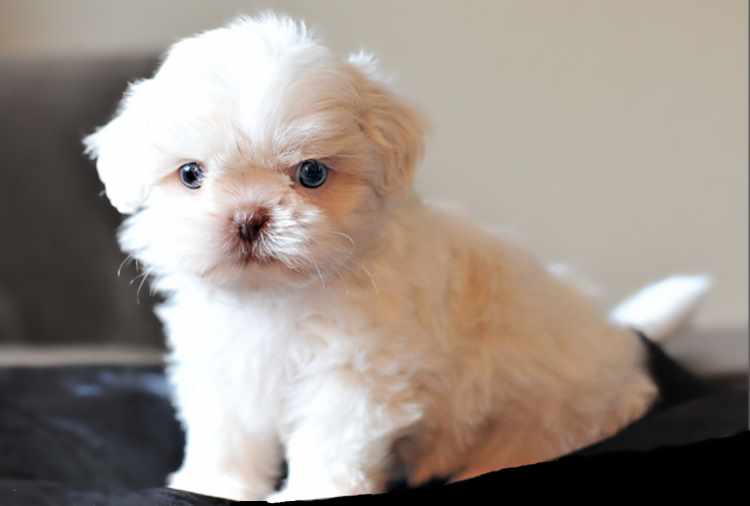 Occasionally a Shih Tzu may have blue eyes, although it is very rare.  When this breeds eyes are blue, it is because there is a lack of the color gene for black.  The result in a dilute pigmentation that will give him this lighter eye color.

You will typically find blue eyes on a newborn puppy when their eyes are still cloudy giving the appearance of blue eyes, but this usually clears up as they grow usually about a couple months.

However, sometimes blue eyes on an adult Shih Tzu can be found in the rare blue dog.

Have you seen a Shih Tzu dog with blue hair before?  If you did, it was likely dyed that color by it's fun spirited pet parent. I'm sure it was beautiful but that isn't what I mean by a "blue" dog.

Shih Tzu come in many coat colors. Some have a single color, while others can have two or more.

But it isn't the color of its' coat that will give a Shih Tzu its blue eyes.

For a Shih Tzu to have blue eyes, you need to look at the pigment of his nose and muzzle and not the color of his hair.

You may have heard of the terms "liver" or "blue" being used to describe a Shih Tzu. These terms are not referring to the color of his coat, but rather the lighter pigmentation of their skin.

The breed standard color of their eyes and nose would usually be solid black.  So the lighter pigment is actually a dilute (weak) gene, and considered a genetic fault.

Liver Shih Tzu will have light brown (or some may even say pink) noses, lips, footpads and eye rims like Max in the picture below.  Their eye color will be a lighter brown or even dark golden hue. Our Max is a Liver Shih Tzu ©EverythingShihTzu.com

While a Blue Shih Tzu often have dark or light gray on their noses, footpads, lips and eye rims.

The gray color when in certain lighting, gives them the appearance of a blue hue, which may be how they got their "blue" description.

A Blue Shih Tzu coat can be any color, but gray is the most common coat color of a this particular dog.  Although a gray coat doesn't necessarily mean it is a Blue Shih Tzu.  You'll need to check the nose to be sure.

If his nose is solid black this is not a "blue" dog.  However his nose could be very dark gray and may look black under low lighting.

When put side by side or in direct sunlight, you will clearly see the difference.

Puppies however, have a different story when it comes to blue eyes.

Did you know all puppies are born with blue eyes?  I didn't know this until pretty recently.  Probably because I don't get to see a lot of new born puppies.

Usually by the time I see them, they are several weeks old and have already changed to their permanent darker eye color.

For the first couple of weeks of a puppies life their eyes will be closed. It's around their third week when they begin to open them and reveal those baby blues.

It's when they are about 10 to 12 weeks old that their eyes changed into their permanent eye color, usually dark brown or black.  Although some puppies may take up to 16 weeks old for this to happen.

There may be a some puppies who will keep their blue eyes, but this is a rare exception.

The Study Behind Blue Eyes in a Dog

Embark veterinarians wrote an in-depth article on why some dogs have blue eyes.  What they found after studying thousands of dogs, was that the "Merle" gene may be present in blue eyed dogs.

According to Wikipedia "The merle gene creates mottled patches of color in a solid or piebald coat, blue or odd-colored eyes, and affects skin pigment."

In other words, the Merle gene is what is responsible for color loss on the nose, skin and eyes.

Blue eyes in a Shih Tzu isn’t always due to genetics but may be a health issue.

When Are Blue Eyes a Cause For Concern

If your dog’s eyes were brown before, and now they are suddenly turning blue or cloudy, this can indicate that he may have cataracts or glaucoma.

Corneal ulcers, or various forms of inflammation of the clear part of the eye (keratitis) may also make the eyes to appear to have a bluish hue.

As with any sudden changes in your dog, you should consult with your veterinarian as soon as possible.

Your vet should know how to keep further damage from occurring or even reverse in some cases, so it will be well worth the visit.

Blue eyes are really quite beautiful on a dog, and not uncommon in a very young Shih Tzu puppy.

Those bright blues that you may see on another dog breed, like the Australian cattle dog, will not be found on a Shih Tzu.

In fact, blue eyes found on a blue dog, aren't blue at all, but rather a dark or light gray that looks blue in certain lighting.