We, as humans, tend to go up and down stairs without giving it a second thought. But to a small dog like the Shih Tzu, these same stairs can seem like climbing a mountain. 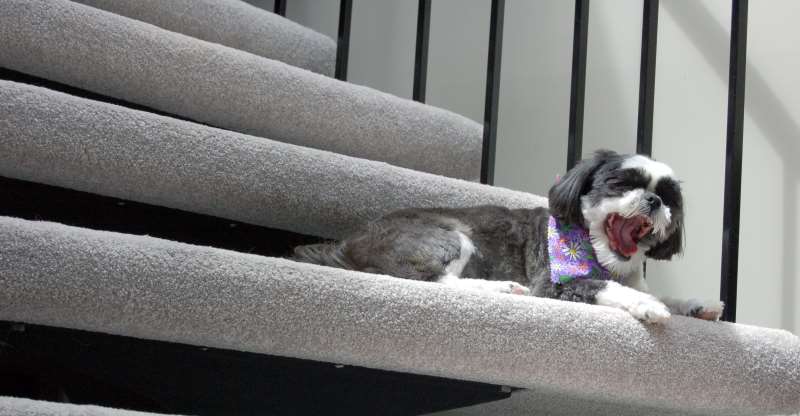 For an adult Shih Tzu dog, climbing stairs can be difficult to maneuver due to their short legs. However, they can go up and down the stairs when allowed to do so at their own pace.

You may notice your Shih Tzu briefly hesitate when they get to the stairs. Don't force them. They may just be contemplating the best way to tackle this task without causing an injury to themselves.

They may move step by step or get a head start and run up the steps, barely touching them until they reach the top or bottom.

For my Max, he gets a running start going up the stairs but always takes it step by step going down.

If your Shih Tzu is a puppy, a senior dog, or you are noticing your dog is reluctant to either ascend or descend the stairs, there may be a good reason.

Why Stairs can be Difficult for Small Dogs

We all know that stairs can be a dangerous place for humans. They can also be dangerous for a small dog like the Shih Tzu.

When a Shih Tzu descends the stairs, they will use their body weight to propel them forward.  They need to do this because their legs are short and won't easily reach the next step.

They are at risk of toppling down the flight of stairs if they try to go too quickly.

This is especially true in dogs with limited mobility, where hard, uncarpeted flooring may become too slippery for them.

Check out this video about dogs.  It gives you an idea of the difficulties dogs can have on stairs.  Some will make you smile, and some are absolutely cringe worthy.

For puppies, climbing stairs can be a daunting experience while they are growing and learning coordination. Because of their instability, they could stumble and fall, which could result in an injury.

It's best to have them avoid stairs until they have built up their muscles and are more steady on their feet. When the puppy becomes more stable on its feet, it is recommended to supervise the puppy while learning to maneuver the stairs.

Why does my dog not go up the stairs?

Have you noticed your Shih Tzu hesitating when he is going up or down the stairs?

He never used to do that before, but every day he is hesitating longer and more often.

Inherently you may tug on his leash and use a little force to give him the motivation to get moving. But instead, he digs in his paws and refuses to go any further.

You may believe he is just stubborn, and you consider using a little more force and drag him to that first step.

He is not being lazy or stubborn. He is trying to tell you something.

Some of the reasons your Shih Tzu hesitates on stairs could be due to aging or possibly an injury or ailment.

As a dog ages, its ability to go up and down the stairs declines.

Their previous youthful sprint up the stairs becomes a distant memory as they feel more aches and pains.

Joint and back problems are more prone to happen with bigger dogs, but even a small Shih Tzu can suffer from these issues.

And although this condition is more common in an older Shih Tzu, it's not unheard of for a young Shih Tzu to have some of the same afflictions or injuries.

The most common reason for a dog's unwillingness to use the stairs is a back injury.

Spinal disk slips or ruptures are not very common in a Shih Tzu, but it does happen.

If you see your dog walking with a wobbly gait or heard him yelp when he jumped from the stairs or another high spot and he is refusing to move, this is not good.

In fact, it now becomes an emergency situation, and you need to get him to the vet immediately.

Without immediate treatments, your Shih Tzu may suffer from permanent damage and paralysis.

A luxating patella or hip dysplasia may also be the cause of their reluctance to use the stairs. And unfortunately, both are common in Shih Tzu.

A Luxating patella is where the kneecap slips out of place. However, this is more likely to occur in their rear legs.

When this happens, your Shih Tzu will not walk on the impaired leg. Instead, they will hold it up off the ground while hopping on their other legs.

Some dogs have a mild case of this and have figured out how they can pop it back in place by stretching or just taking a few steps.

But when they cannot walk on it at all from being unable to pop it back into place and appear to be in a lot of pain, corrective surgery is available.

You should definitely have your vet give him a check-up if you suspect a luxating patella. The vet can usually tell just by manipulating the Shih Tzus leg and feeling the slip. Catching this problem sooner rather than later can make all the difference in preventing further injury.

Hip Dysplasia is a degenerative disease where the bone doesn't fit snug in the hip socket, and over the years, the friction causes arthritis and pain.

At some point, the pain of climbing stairs becomes too much, and they will try to avoid it.

Climbing up stairs puts all their weight on their back legs and can worsen the condition.

Glucosamine/Chondroitin supplements may help slow down the progression of this degenerative disease.

Of course, there may be other reasons why your dog won't use the stairs, which are less severe than those issues mentioned above.

He may have strained a muscle or has vision problems. Or, it could be caused by a negative experience linked to the stairs, like in a previous fall.

However, as with any medical issue, consulting a veterinarian is always recommended instead of trying to diagnose it yourself.

The bottom line is if your Shih Tzu is refusing to use the stairs, don't assume he is just being stubborn and force him.

The better solution is to take him to the vet instead to rule out any medical issues. 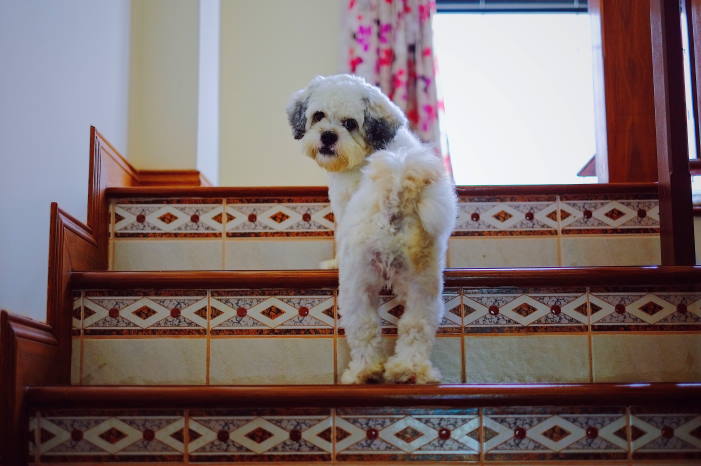 If you have ever seen a dog fall down a flight of stairs, it is very horrifying, not only for your dog but also for you, and could also lead to severe injuries.

Keeping your Shih Tzu away from the stairs will help keep him safe from injuries he may sustain.

An older Shih may have difficulty climbing stairs for the same reason.

They are not as steady on their feet as they once were, and if they have Hip Dysplasia or a slipped disc, climbing stairs may cause even more damage to their already fragile body.

Using a gate so he doesn't get the urge to follow you down the stairs will keep him from toppling down.

Train your Shih Tzu to go slow when using the stairs, and be patient; never try to rush him up or down.

Always supervise a puppy on the stairs, they are still in their awkward stage, and their bones are still growing. If they fall, this could do some serious damage to their growth plates.

Keep an eye out for any of the conditions listed above. And if your Shih Tzus behavior changes when approaching the stairs, talk to your vet about your concerns.

Keep in mind that one of the perks of having a small dog is that they can easily be picked up and carried when needed.